Battle of the Seven Sisters

Other name : Battle of the Seven Sisters

Aired On :Monday to Saturday

A low-key wealthy man leaves seven last wishes for his seven daughters, born from different mothers. Eldest daughter Priscilla Wong has a successful career, but her romantic life is a mess. She maintains an improper relationship with a married man and is alienated from her sister Samantha Ko. Samantha’s life was bumpy until she met manga expert Luk Wing and her life turns around. Priscilla and her half-sister Rosina Lam are on bad terms. Rosina cannot let go of her dead husband and mingles with her friend Timothy Cheng and an artist who resembles her dead husband. Fourth sister Kamen Kong’s two-faced character almost causes big trouble. Fifth sister Jeannie Chan seeks revenge against all the sisters because of her mother’s misfortune. Sixth sister Judy Kwong falls to her lowest point because she cannot break through a character flaw. The sisters discover their father also had a seventh daughter. The seven sisters, who are more like strangers, embark on a journey to search for family as their father’s last wish, while also finding their own self-worth. 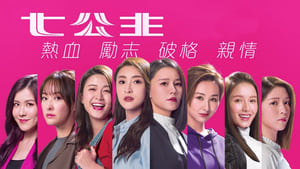