Aired On : Tuesday to Sunday

Gao Yang does not get along with his father Gao Bin since young, despite being brought up solely by him. He is a rebellious kid, often skipping school and testing the limits of his teachers. Although the daughter of the principal Jin Beibei likes him, he does not return her feelings and instead chases after the school’s belle. He is disappointed when the belle suddenly announces that she is transferring schools to Beijing. However, his depressed feeling does not last long when his friends tell him that a beauty named Ye Xiao Wen is transferring to their school. Gao Yang secretly heads to the office to take a look at “Ye Xiao Wen”, and is indeed not disappointed by her appearance. However later, the Ye Xiao Wen who walks into the class turns out to be a guy. It turns out to be a misunderstanding, as the “beauty” that Gao Yang saw in the office is Mi Jia, another transfer student in the next class. Gao Yang is disappointed, and adding on to his misery, Ye Xiao Wen who is now his deskmate turns out to be a weirdo. Not only does he refuse to say anything about his past, he is also adamant about changing seats with Gao Yang so he could seat on the outer side. However, Ye Xiao Wen is extremely well-liked and immediately earns the attention of their teacher, as well as Gao Yang’s new crush Mi Jia. Gao Yang, who was the center of attention of the teachers since young, is extremely upset about this fact. He decides to challenge Ye Xiao Wen in PE class, but is instead defeated by him. Gao Yang decides that he and Ye Xiao Wen will be “irreconcilable rivals” from then on. However when he returns home after school, he is shocked to see Ye Xiao Wen cooking at his house! Gao Bin then drops another shocker – Ye Xiao Wen would be living together with them. From that moment, a chaotic and comedic “co-habitation” life begins 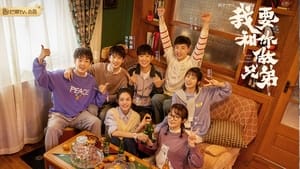